Astaxanthin is a Super Antioxidant for Your Skin

Aging and the development of disease often starts with the imbalance of high oxidative stress and low levels of antioxidants. Oxidative stress can be described as the inflammation and cell damage within the body caused by damaging molecules called “free radicals”.[1] This damage from free radicals can occur as a result of environmental stress and lifestyle choices such as sun exposure, smoking, pollution, medications, etc.[1]

Our bodies naturally have the defense mechanisms to combat oxidative damage, but excessive levels of free radicals in our bodies may cause a state of oxidative stress.[1] Lowering inflammation levels and including antioxidants into your diet can help to fight disease and may decrease the signs of aging. The rate at which skin ages can also be determined by levels of inflammation in the skin due to oxidative stress and ultraviolet (sun) exposure. Astaxanthin is one example of a super antioxidant that has been proven to be effective in lowering levels of inflammation and other health parameters such as blood pressure, triglyceride levels, etc.[2] 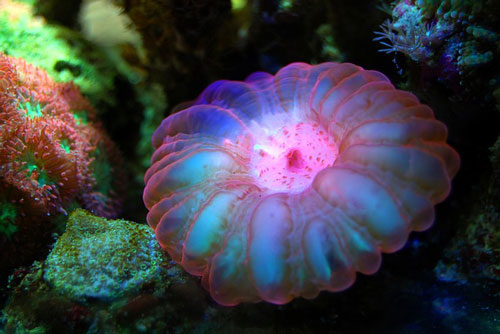 Astaxanthin belongs to a family of compounds called carotenoids, with a very unique molecular structure compared to other commonly known carotenoids like beta-carotene.[3,4] Astaxanthin is a pigment found in natural sources such as algae, yeast, and marine animals like salmon, trout, lobster, crab, shrimp, krill, and more.[2] The highest natural source of astaxanthin comes from the microalgae Haematococcus pluvialis.[5] It is produced commercially for use in cosmetics, food supplements, and as a red food dye in animal and fish feed.[5]

Astaxanthin has the highest antioxidant capabilities compared to other carotenoids and is even suggested to be 100 times more potent as an antioxidant than vitamin E.[2,5] Part of the reason why astaxanthin is so powerful is because of the unique molecular structure that allows it to have antioxidant activity on both the inside and the outside of a cell.[3] Other antioxidants such as vitamin C and vitamin E are only able to affect the outside of a cell.[2] Some of its many health benefits may include:[2]

Astaxanthin Benefits on the Skin

A study in Japan looked at the skin benefits of oral supplementation of astaxanthin (6 mg per day) in combination with a topical application of astaxanthin cream.[7] This study was 8 weeks in duration and consisted of 30 women between the ages of 25-50 years old.[7] The following results were seen in either the skin around the eyes (the “crow’s feet”) or on the cheeks:[7]

The same study also looked at oral supplementation of astaxanthin (not combined with a topical application of astaxanthin) in men.[7] The results included improvements in wrinkles and elasticity.[7] The exact mechanism of how astaxanthin benefits the skin in these ways is not quite understood. Although, one suggestion offered by researchers is that astaxanthin may promote the production and repair of collagen due to its high antioxidant activity.[7]

Yet another study explored the skin benefits of astaxanthin on a cellular level (in a laboratory) and found that astaxanthin protects skin cells against ultraviolet B (UVB) by decreasing inflammation.[6] The study then went on to further validate the UVB protective effects of astaxanthin on 59 healthy women in Japan.[6] The women supplemented with astaxanthin during the arid months of August through December when skin quality normally deteriorates due to climate and recent high UV exposure from the summer months.[6] The group of women who supplemented with astaxanthin showed no change in skin moisture, deep wrinkling, or inflammation markers in their skin. On the other hand, women who did not supplement with astaxanthin showed a significant decrease in skin quality and higher levels of skin inflammation.[6]

Anti-aging Effects of Astaxanthin on Skin

Environmental exposure has a big impact on skin health and the rate of aging. The signs of skin aging due to inflammation caused by UV exposure can include wrinkling, dryness, loss of elasticity, and age spots. Sometimes our skin needs a little extra help besides avoiding overexposure to sunlight and dry, cold climates. A super antioxidant, such as astaxanthin, may be a useful addition to your skin care routine as a supplement to help in combating oxidative stress and aging of the skin. Keep in mind that astaxanthin is fat soluble, and so its absorption and antioxidant benefits are enhanced when taken with an oil such as fish oil.[2] As always, speak with your provider to see if astaxanthin is safe for you to supplement with.

* This Website is for general skin beauty, wellness, and health information only. This Website is not to be used as a substitute for medical advice, diagnosis or treatment of any health condition or problem. The information provided on this Website should never be used to disregard, delay, or refuse treatment or advice from a physician or a qualified health provider.